On April 8, Scratch Food & Beverage in Troy Hill is hosting the first Revival Night to celebrate menus from Pittsburgh restaurants that are no longer around.

O’Brien, once the executive chef at Poros, is reviving Mediterranean classics like lavraki (sea bass) with tabbouleh and grapefruit yogurt, ful medames (a dip featuring lemon and tahini), and the sorely missed Poros chips made from zucchini. Warren and Harper are shaking up beloved cocktails like Daphne’s turned sour using Masticha, a Greek liqueur.

O’Brien is already planning for the next Revival Night, scheduled for early May. He plans to work with the team from Fig and Ash, a farm-to-flame restaurant on the North Side.

“There’s such great talent in Pittsburgh, and so many things that are overlooked or missed because it’s ‘on to the next one’ on the restaurant scene now," says Scratch's owner Don Mahaney in a press release. "We want to stop time for a minute and recognize some really outstanding dishes, drinks, and talent and have a ton of fun in the process.

Reservations for the April 8 dinner are available on opentable.com.

This Spring, to the delight of many Pittsburghers, Dish Osteria and Bar will reopen.

Two years ago, The Savoia Family announced a sabbatical through a Facebook post. “Our time away from Dish will allow us to catch our breath and dedicate ourselves further to our passion for food, which will lead to our next chapter,” wrote the family.

Early this week, Cinderlands Beer Co. released an open letter to the public. The brewery, recently nominated for the USA Today 10 Best New Breweries (vote for them here), announced plans to suspend canning and limit distribution.

“We are a brewpub first and foremost,” Paul Schneider, Cinderlands’ head brewer writes. Cinderlands produces a wide range of beer and is struggling to keep up with the demand. In order to keep as many beers in-house, some regulations became necessary.

“We're still going to be short for awhile, and we're sorry for how that affects your experience with us,” writes Schneider.

Soon, Cinderlands will rely on their warehouse to maintain production. But until then, the brewery is asking for patience. 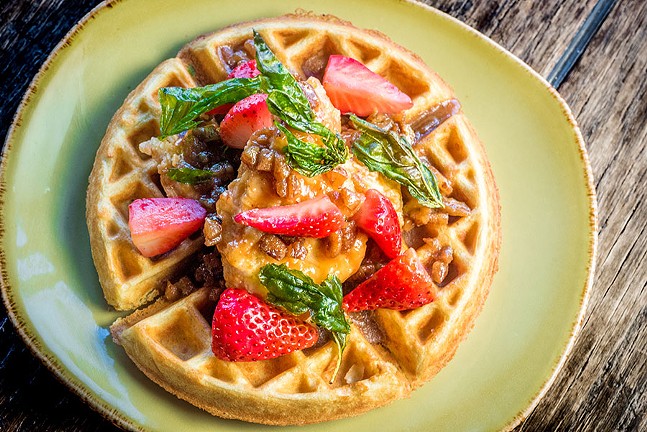 In 2020, a new spot for gaming, drinks, and food is coming to Pittsburgh.

The Punch Bowl Social will inhabit the old stadium space across from PPG Paints Arena. Plans for the space highlight a 360 degree bar and an outdoor patio space.

Something new is coming to The Westmoreland Museum of American Art, and it’s not a gallery. On March 30, the museum is opening a café .

The café will be open during museum hours, which are set to expand once the eatery is unveiled.

Gaby et Jules is one of Pittsburgh’s prime spots for French pastries. Soon, sweet-seekers can get their French fix at a new East Liberty location.

Gaby et Jules: Café bridges the cuisine between sister restaurants Gaby et Jules Patisseries et Macaron and Paris 66. The cafe offers prepared light lunch options — for dine in or take out — in addition to coffee, tea, and a selection of artisan desserts.

The cafe is scheduled to open this summer, coinciding with the 10th anniversary of Paris 66.

The macaron giants of Pittsburgh are coming together to celebrate the French cookie on March 20.

Gaby et Jules, Macaron Bar, Oakmont Bakery, Le Macaron French Pastries, and Madeleine Bakery & Bistro are participating in the “Day of the Macaron.” All five bakeries plan to give a free macaron to customers and donate proceeds to the Greater Community Food Bank, but in Pittsburgh, there’s an added twist.

Rather than limit the celebration to just one day, the bakeries are using a Macaron Passport. They can be picked up on March 20 and used through March 24, good for a free macaron at each stop. Collect stamps from three different bakeries to receive a t-shirt from Macaron Bar.

Don’t miss the chance to honor this French dessert all weekend long.

Pittsburgh chef Sonja Finn was given a spotlight in Food & Wine magazine this week. The article, titled “19 Great Restaurants to Work For,” showcases Finn for her “top-tier wages and strong mentorship.”

Finn revamped the pricing on Dinette’s menu in 2017, increasing items by 15 percent in order to pay her employees a better wage, as they have cut out tipping. Now, as reported by the magazine, her front-of-house staff starting wage is five times the required payment ($2.83) and kitchen staff more than double ($7.25).

In the piece, Finn is also praised for her mentorship skills. Nine Dinette alumni have opened businesses in the city, including Bitter Ends Garden & Luncheonette, Spirit, Full Pint Brewing, and Pear and the Pickle.